The lines were test crossed to CML451 (HG-B) and CL02450 (HG-A) and TCs phenotyped under heat stress and optimal conditions in >10 locations in 2013 and 2014 summer season. The panel was genotyped in high density using Genotyping by Sequencing (GBS), which yielded ~900K SNPs. The scheme followed for association mapping and further applications is depicted below. 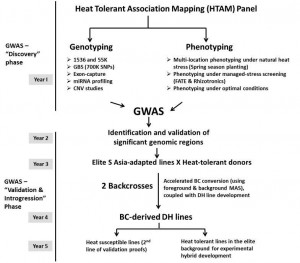